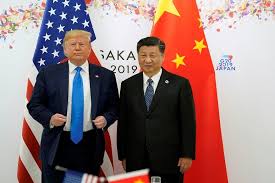 Mr Bolton has written a book.

In the book, this former White House insider alleges that in Trump’s meetings with Chinese President Xi, that Trump sought Chinese help in winning re-election.

It is also alleged that Xi told Trump about China’s plan to intern hundreds of thousands, up to one million, of Muslim Uighurs in concentration camps as a means of fighting terror, and that Trump said that it was a good idea and that Xi should go right ahead.

The US president thinks that he knows how the world works, but I’ve never thought that he does. Here’s your proof.

Not only a grossly immoral thing to endorse these camps, but stupid too. How would he think that such an endorsement would never become public?

40 thoughts on “Trump, His Good Friend Xi and the Uighurs”