its the hat thats the give-away! 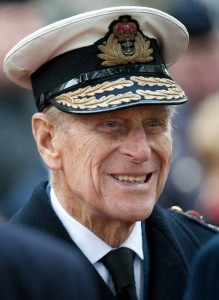 The first is occupied by a 92 year-old Prince Philip, a man who successfully surmounted his upbringing by a mother who was profoundly deaf, and who was committed to a mental hospital when he was eight; and by his father Prince Andrew of Greece, who had promptly deserted his young family and went off to live with his mistress.

He served his adopted country superbly during World War Two, seeing wartime action aboard HMS Ramillies &  HMS Valiant, and destroyer service aboard HMS Wallace amd HMS Whelp. The Wallace survived a night-time bombing by German aircraft through the agile mind of the young Lieutenant, who organised a raft with smoke floats which fooled the enemy bombers into targeting the float, thus allowing the destroyer to move quietly away from the targeted area.

He met, wooed and married a young Princess Elizabeth, and, once she assumed the Crown on the sad and untimely death of her beloved father George VI, undertook the role of Consort to his wife, now of course our Queen Elizabeth the 2nd. He promised to be her ‘‘liege-man of life and limb’, and has kept that promise for well over sixty years.

He has performed many thousands of engagements both with the Queen and solo, and his Duke of Edinburgh awards have been the backbone of a long life of service to the Nation. He has suffered bad health for some time, and is now in hospital to allow the medical people to determine what the problems are with his elderly body.

He is, as far as this commentator is concerned, a fantastic man, a good husband,  a brave man whose steadfast loyalty and love have singled him out as a good man; whose family have shown him and his wife that they are all too human, and his well-publicised ‘sense of humour’ is just a man stating his own mind without the cautions of diplomacy.

The other bed is occupied by Nelson Mandela, the former terrorist and ex-President of South Africa.