WHEN THE SURREAL BECOMES ABSURD..

IN THE CRUCIBLE OF THE DAMNED.. 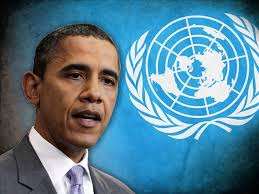 I wonder how all those leftists who fervently worship at the shrine of the moral cesspit that is the United Nations feel about this?

The United Nations has warned Barack Obama that the US should not carry out “punitive” strikes against Syria for its alleged use of chemical weapons. Reported by the Associated Press, Ban Ki Moon said an attack to punish Syria would “unleash more turmoil”, adding that the UN Charter made illegal any military action unless in self defense or approved by the Security Council.

Well, back in the days of the evil George W Bush, it was made clear that America operated to ITS laws, not those of the UN. I supported that view and still do since i believe the UN to be a force for inertia at best, genocide at worst. BUT the left loudly opposed the approach of George W as it insisted that the UN must fully

approve whatever was to be done. Well, look at what is happening now. Obama, Kerry and Pelosi – the unholy trinity – are making noises that are clearly at odds with the WILL of the UN.

So if it was wrong to ignore the UN back then, why is it right to do so now?