Last evening saw the BBC host another of the Election Debates. It had the Greens (Hard left) the SNP (Hard left) Plaid Cymru (Hard Left) Labour (Hard left) and UKIP (Right). The audience was the most biased I have EVER witnessed and this was continually evidenced when Nigel Farage’s comments were either met in stony silence ( as when he suggested we must take better care of our Army veterans) or else just booed (When he pointed out that we must control our own borders). By contrast, the wild pledges from the leftists to “restore the power of the trade unions” and “to remove our Nuclear deterrent” and “Remove the evils of austerity and start spending” were met with thunderous applause. I think the entire event is summed up in this image 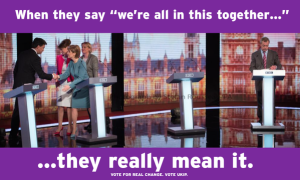 Farage stands alone, the Leftists congratulate each other.

One final point. Readers will know I am an implacable opponent of the DUP. But it was a total disgrace that they were EXCLUDED from this debate last night.

They had EIGHT MP’s.

Plaid Cymru were invited. They have THREE MP’s.

The Green Party was invited. They have ONE MP.

The SNP had the starring role. They had 6 MP’s.

The BBC bias and their distortions may cost this country more than the £3 BILLION it extorts each year from the License tax. Last night saw the left wing media establishment in the form of the BBC push the toxic left wing political establishment and it was an absolute disgrace.

55 thoughts on “UNDERSTANDING THE ESTABLISHMENT”