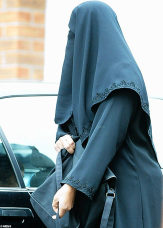 UK institutional submission to Islam draws closer with the news that a magistrate faces legal prosecution after he walked out in protest after a women appeared wearing a Niqab in his court. Magistrate Ian Murray pulled out of the hearing when Zoobia Hussain appeared in a niqab, which covers the head and the face apart from the eyes.

Hussain, 32, believed to be a mother of five, appeared for what was due to be a brief administrative hearing this week before bench chairman Mr Murray and two colleagues at Manchester Magistrates Court. She denies causing £5,000 worth of criminal damage including graffiti to a housing association property from which she had been evicted. Her solicitor, Judith Hawkins, said Hussain wanted to appear in the dock in the niqab because she “observed the Muslim religion and remains covered in public places when men are present”.

Mr Murray then stunned those in court by saying he was withdrawing from the case because she was wearing a niqab, adding: “I do not feel I have to give any reasons. This is my personal view.”


Hussain, from the Crumpsall district of Manchester, told her solicitor his walkout was “scandalous”. She added: “There is a human being under here.”


Yes, I don’t doubt that, and one that stands indicted of serious criminal charges and who must be made to show her face and be stripped off the sickening mask of Islam. This country is not Islamic and should not tolerate this contrived effort by Islamic activists to advance the acceptance of the ROP.  The magistrate should not have walked out however, had it been me I would have had Hussein thrown out, fined and forced to return dressed in a manner more appropriate for a British as opposed to a Pakistani Court.

32 thoughts on “UPHOLDING THE MASK OF ISLAM”