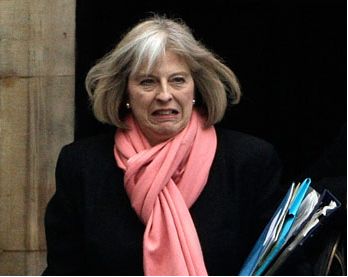 Either you really couldn’t make it up, or they really don’t want him to go.

Two days ago Theresa May, the Home Secretary, brandished a piece of paper and declared “extradition for Qatada in our time”. Today, the Council of Europe says: “Oh no you don’t”. The BBC carries the breaking news.

I can barely bring myself to follow this saga anymore, so excuse me if I get it wrong. It seems that on Tuesday, May said the way was clear for Qatada to be deported, following a completed deal with Jordan and the passing of a deadline for him to appeal the decision to some Grand Chamber of High Priests of the European Court of Human Rights. She triumphantly ordered his arrest ahead of deportation that day. Only he did appeal that decision on Tuesday, his counsel claiming the deadline for an appeal was midnight on Tuesday, teeing up two days of spin and arguments over who was right and who was wrong. Theresa May and the legions of legal brains at the Home Office were wrong, we’ve just discovered. So Qatada doesn’t go afterall, because we’re not foreign and we obey laws and treaties, and he’s gonna hang around for a long time yet, and Theresa May looks even more stupid than at the beginning of the week, which is quite an achievement.
Can we get back to governing ourselves now?
Click to rate this post!
[Total: 0 Average: 0]
britain Crazy World Europe GOVERNMENT

9 thoughts on “WANT TO KNOW WHAT DAY IT IS? DON’T ASK THE HOME SECRETARY”