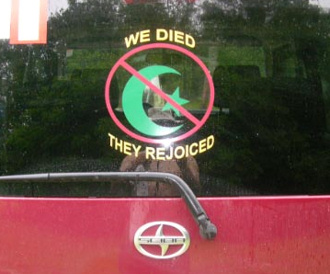 What do you make of the news that a lawsuit has been filed against two officers at North Carolina’s Camp Lejeune Marine base for banning a civilian worker – a 25-year Marine whose son was a victim of the U.S.S. Cole attack – from publicly condemning Islamic terrorists?

The lawsuit was filed by the Thomas More Law Center on behalf of Jesse Nieto after base officials first ordered him to remove bumper stickers from his private vehicle then banned the vehicle from all federal installations nationwide. Lawyers for the Thomas More Law Center said Nieto served in the Marines for 25 years, including two combat tours in Vietnam. His youngest son, Marc, and 16 of Marc’s shipmates were killed Oct. 12, 2000, by Islamic terrorists who bombed the U.S.S. Cole in Yemen.

Have a look at the OFFENSIVE bumper stickers. I think it wrong to have banned it given the circumstances.

12 thoughts on “WE DIED, THEY REJOICED.”