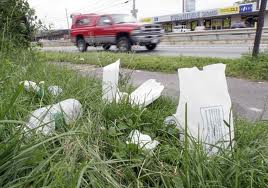 The sheep like mindset of people here is beyond parody. At a time of severe economic recession, the Stormont diktat is to raise taxes on people…and hit the poorest hardest.  But hey, they are saving the environment that makes it ok – on and mimicking the Republic, equally important for the Nationalists encamped at Stormont.

THE 5p bag tax comes into force in Northern Ireland stores on Monday, and while some shoppers see it as an inconvenience – and others as “another stealth tax” – most agree that something must be done to clear the Province of the scourge of the unsightly litter caused by 160 million bags every year. In a survey of shops in Portadown, the attitude was: “It’s a bit of a nuisance, but we can live with it, and it has to be said that plastic bags cause untold damage to the environment and are a terrible eyesore everywhere.”The levy is 5p per bag, rising to 10p after the first year..”

Let’s leave aside unscientific asinine surveys and just admit that this leftwing social engineering will hit everybody, cost us all extra £££, and at a time when people have less cash than ever before.

The puerile comparisons with what happened in the Irish Republic conveniently ignore the pesky detail that a similar tax was introduced FIVE YEARS before the recession, in boomtime days. Is anyone seriously suggesting that such a consumer tax would be introduced NOW by an Irish Government? The clowns at Stormont are using their powers to punish, it is all they can do. To introduce such a punitive tax in good times when people can perhaps at least afford it is one thing, but here in Northern Ireland we have a VERY stretched economy with record levels of unemployment. Who in their RIGHT mind would decide this is the moment to take cash from consumers?

As for the issue of rubbish, I also find plastic bags lying around abhorrent. I live in the countryside and each morning, on the strip of grass outside my house and parallel to the main road, I have to remove plastic bottles, plastic fast food containers, crisp bags, and other unsavoury things thrown out of cars by the crass unwashed who just don’t care about any form of self responsibility. Will the Minister now move against all these things? What next to BAN, Mr Attwood?

You cannot ban the feckless and inconsiderate. I wish you could. However we could make sure that those who litter PAY for their crimes – but why make the rest of the population also pick up the bill??