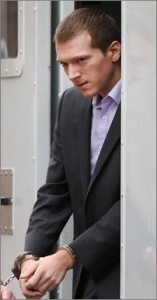 Jeremy Forrest (30) was a teacher who fell in love with a 15-year old pupil of his and ran away with her to France last year. It seems consensual on both sides. Despite this he was convicted of child abduction, as well as five counts of having sex with a child.

He pleaded guilty, offered no defence and he’s now been sentenced to five and a half years in prison. Needless to say, he won’t ever be back in a classroom.

Apparently he was a good and conscientious teacher. News reports don’t indicate any previous. The girl testified that he went the France with her only because he feared she would otherwise harm herself.

I want to ask you a question, dear reader. Imagine that Forrest is a mate of yours. Imagine he’s an old mate, always a good fella, someone you could rely on, one of the good guys who always stood his round. Then your mate was plastered all over the press, and now he’s been convicted. Would you end your friendship?

It’s easy to demand the hangman or say “chop his bollocks off” when you don’t know him. But what if he’s a mate who you’ve known from school and with whom you’ve shared alot? Would you now regard him as dead? Never see or speak with him again? Would you disown him? I can’t say that I would.

In that position I’d probably visit him and take him for a pint when he’s released.

33 thoughts on “WOULD YOU DISOWN JEREMY FORREST?”