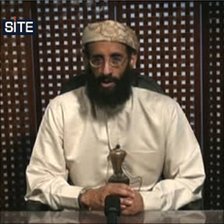 Pleased to read that the 72 virgins will be kept busy.

The US-born radical Islamist cleric and suspected al-Qaeda leader Anwar al-Awlaki has been killed in Yemen, the country’s defence ministry reported. US administration officials confirmed the reports, according to US media. Awlaki, of Yemeni descent, has been on the run in Yemen since December 2007. The US had named him a “specially designated global terrorist” for his alleged role in a number of attacks and US President Barack Obama is said to have personally ordered his killing. The defence ministry statement said only that he died “along with some of his companions”.

The death of any human being is not a cause for celebration but rather, as in this case, grim satisfaction that we have removed this terrorist from our planet. Allahu Akhbar.