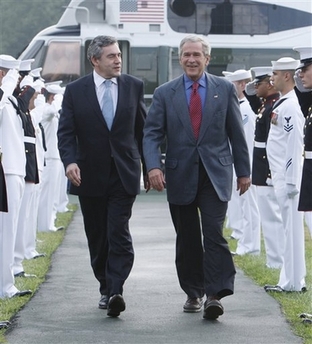 UK PM Gordon Brown holds his first meeting with US President George W Bush today and the UK media is full of it. I listened to the BBC coverage earlier this morning and in summary they are putting forward the view that Brown must not become a "poodle" to Bush "like Blair was", that Brown needs to assert the importance of an orderly withdrawal from Iraq, that Brown must call for the closure of Guantanamo Bay and that there is no "special relationship" between the two nations anyway.

First, when a UK Prime Minister develops a close relationship with a US President, he or she is instantly portrayed as a "poodle". But when a UK PM adopts a close relationship to the EU, why that’s progressiveness personified. Following on from this is the yearning need from the UK media for the UK not to have a special relationship with the US. I listened to a former "special adviser" to the Blair government on the radio state that there is absolutely NO special relationship with the US and that it is a conceit to think so. Then there’s the small matter of the need to run away from Iraq. Brown won’t say it in those words and will put on a show of support but isn’t it clear that the way he plans to retrieve lost popularity and win favourable media exposure is to bring our boys home and to hell with the war on terror? Best to fight  ’em in Piccadilly Circus, right? The UK media is endemically anti-American, and especially when the US has a Republican President. It wants to see Brown stick two fingers up to Bush but knows he won’t. And so the fear and loathing intensifies….